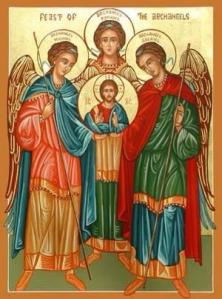 Saint Michael, Saint Gabriel, and Saint Raphael, Archangels. The liturgy celebrates the feast of these three archangels who are venerated in the tradition of the Church. Michael was the archangel who fought against Satan and all his evil angels, defending all the friends of God. He is the protector of all humanity from the snares of the devil. Gabriel announced to Zachariah the forthcoming birth of John the Baptist, and to Mary, the birth of Jesus. His greeting to the Virgin, “Hail, full of grace,” is one of the most familiar and frequent prayers of the Christian people. Raphael is the archangel who took care of Tobias on his journey.

St. Michael the Archangel, defend us in the day of battle. Be our safeguard against the wickedness and the snares of the devil. May God rebuke him, we humbly pray. And do thou, O prince of the heavenly host, by the power of God, cast down into hell Satan and all the evil spirits who prowl throughout the world seeking the ruin of souls. Amen.

confession of a dying servant opened Vincent´s eyes to the crying spiritual needs of the peasantry of France. This seems to have been a crucial moment in the life of the man from a small farm in Gascony, France, who had become a priest with little more ambition than to have a comfortable life.

It was the Countess de Gondi (whose servant he had helped) who persuaded her husband to endow and support a group of able and zealous missionaries who would work among poor tenant farmers and country people in general. Vincent was too humble to accept leadership at first, but after working for some time in Paris among imprisoned galley-slaves, he returned to be the leader of what is now known as the Congregation of the Mission, or the Vincentians. These priests, with vows of poverty, chastity, obedience and stability, were to devote themselves entirely to the people in smaller towns and villages.

Later, Vincent established confraternities of charity for the spiritual and physical relief of the poor and sick of each parish. From these, with the help of St. Louise de Marillac, came the Daughters of Charity, “whose convent is the sickroom, whose chapel is the parish church, whose cloister is the streets of the city.” He organized the rich women of Paris to collect funds for his missionary projects, founded several hospitals, collected relief funds for the victims of war and ransomed over 1,200 galley slaves from North Africa. He was zealous in conducting retreats for clergy at a time when there was great laxity, abuse and ignorance among them. He was a pioneer in clerical training and was instrumental in establishing seminaries.

Most remarkably, Vincent was by temperament a very irascible person—even his friends admitted it. He said that except for the grace of God he would have been “hard and repulsive, rough and cross.” But he became a tender and affectionate man, very sensitive to the needs of others.

Pope Leo XIII made him the patron of all charitable societies. Outstanding among these, of course, is the Society of St. Vincent de Paul, founded in 1833 by his admirer Blessed Frédéric Ozanam 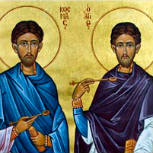 Nothing is known of their lives except that they suffered martyrdom in Syria during the persecution of Diocletian.

A church erected on the site of their burial place was enlarged by the emperor Justinian. Devotion to the two saints spread rapidly in both East and West. A famous basilica was erected in their honor in Constantinople. Another famous basilica is to be found near the coliseum in Rome. Their names were placed in the canon of the Mass, probably in the sixth century.

Legend says that they were twin brothers born in Arabia, who became skilled doctors. They were among those who are venerated in the East as the “moneyless ones” because they did not charge a fee for their services. It was impossible that such prominent persons would escape unnoticed in time of persecution: They were arrested and beheaded.

In one of the largest such ceremonies in history, Pope John Paul II canonized Padre Pio of Pietrelcina on June 16, 2002. It was the 45th canonization ceremony in Pope John Paul’s pontificate. More than 300,000 people braved blistering heat as they filled St. Peter’s Square and nearby streets. They heard the Holy Father praise the new saint for his prayer and charity. “This is the most concrete synthesis of Padre Pio’s teaching,” said the pope. He also stressed Padre Pio’s witness to the power of suffering. If accepted with love, the Holy Father stressed, such suffering can lead to “a privileged path of sanctity.”

Many people have turned to the Italian Capuchin Franciscan to intercede with God on their behalf; among them was the future Pope John Paul II. In 1962, when he was still an archbishop in Poland, he wrote to Padre Pio and asked him to pray for a Polish woman with throat cancer. Within two weeks, she had been cured of her life-threatening disease.

Born Francesco Forgione, Padre Pio grew up in a family of farmers in southern Italy. Twice (1898-1903 and 1910-17) his father worked in Jamaica, New York, to provide the family income.

At the age of 15, Francesco joined the Capuchins and took the name of Pio. He was ordained in 1910 and was drafted during World War I. After he was discovered to have tuberculosis, he was discharged. In 1917 he was assigned to the friary in San Giovanni Rotondo, 75 miles from the city of Bari on the Adriatic.

On September 20, 1918, as he was making his thanksgiving after Mass, Padre Pio had a vision of Jesus. When the vision ended, he had the stigmata in his hands, feet and side.

Life became more complicated after that. Medical doctors, Church authorities and curiosity seekers came to see Padre Pio. In 1924 and again in 1931, the authenticity of the stigmata was questioned; Padre Pio was not permitted to celebrate Mass publicly or to hear confessions. He did not complain of these decisions, which were soon reversed. However, he wrote no letters after 1924. His only other writing, a pamphlet on the agony of Jesus, was done before 1924.

Padre Pio rarely left the friary after he received the stigmata, but busloads of people soon began coming to see him. Each morning after a 5 a.m. Mass in a crowded church, he heard confessions until noon. He took a mid-morning break to bless the sick and all who came to see him. Every afternoon he also heard confessions. In time his confessional ministry would take 10 hours a day; penitents had to take a number so that the situation could be handled. Many of them have said that Padre Pio knew details of their lives that they had never mentioned.

Padre Pio saw Jesus in all the sick and suffering. At his urging, a fine hospital was built on nearby Mount Gargano. The idea arose in 1940; a committee began to collect money. Ground was broken in 1946. Building the hospital was a technical wonder because of the difficulty of getting water there and of hauling up the building supplies. This “House for the Alleviation of Suffering” has 350 beds.

A number of people have reported cures they believe were received through the intercession of Padre Pio. Those who assisted at his Masses came away edified; several curiosity seekers were deeply moved. Like St. Francis, Padre Pio sometimes had his habit torn or cut by souvenir hunters.

One of Padre Pio’s sufferings was that unscrupulous people several times circulated prophecies that they claimed originated from him. He never made prophecies about world events and never gave an opinion on matters that he felt belonged to Church authorities to decide. He died on September 23, 1968, and was beatified in 1999.

At Padre Pio’s canonization Mass in 2002, Pope John Paul II referred to that day’s Gospel (Matthew 11:25-30) and said: “The Gospel image of ‘yoke’ evokes the many trials that the humble Capuchin of San Giovanni Rotondo endured. Today we contemplate in him how sweet is the ‘yoke’ of Christ and indeed how light the burdens are whenever someone carries these with faithful love. The life and mission of Padre Pio testify that difficulties and sorrows, if accepted with love, transform themselves into a privileged journey of holiness, which opens the person toward a greater good, known only to the Lord.”

“The life of a Christian is nothing but a perpetual struggle against self; there is no flowering of the soul to the beauty of its perfection except at the price of pain” (saying of Padre Pio).

Our Lady of Sorrows

Her Seven Sorrows:
1. St. Simeon’s Prophecy
2. Flight into Egypt
3. Loss of Jesus in the Temple
4. Meeting of Mary and Jesus on the Way to Calvary
5. Crucifixion and Death of Jesus
6. Piercing of the Side of Jesus, and His Descent from the Cross
7. Burial of Jesus.

Please pray for the children of our parishes who will celebrate the fullness of the Sacrament of Holy Communion for the first time this Sunday (18th June) during the 11am Mass of Corpus Christi, in Ss John & Columba’s Church.

Many thanks to their parents, God Parents, Teachers and Parish catechists for helping them to prepare for this wonderful occasion.  May the Lord bless them and keep the faithful to His love.

The Bishop’s Conference of Scotland has produced the following letter as preparation to the General Election taking place in June:

The Application form is now available for collecting from Fr Kevin if you wish to enroll your child to receive the Sacrament of Confirmation and to make their First Holy Communion.  Alternately, you can down load a copy from the Sacrament Section of this website.

If you have a child that is due to start school in August 2017 and wish to enroll them into St John’s, the school will be accepting applications on Tuesday 24th January from 2pm until 5-30pm.

Just pop in on the day or for more information please contact the school office on 01383 602432. They will require to see your child’s birth certificate and also a utility bill as proof of address

Caritas Archdiocese of St Andrews & Edinburgh is the official branch of the our local Church that deals with the Churches charitable works, as well as promoting Justice and Peace and the Churches Social Teaching.

They have recently launched an appeal for donations of clothing.  If you have any nearly new, or clothes in fairly good condition that you think is suitable for someone else to wear, please bag or box them up and drop them into either St Peter in Chains or Ss John & Columba.

1130 in Our Lady of Lourdes Church, Dunfermline

1700 in Our Lady of Lourdes Church, Dunfermline

Please check the weekly Newsletter (found on website) in case of any changes to weekday Mass times:

Tuesday Mass @ 1000 in Our Lady of Lourdes, Dunfermline

Thursday Mass @ 1900 in Our Lady of Lourdes Church, Dunfermline

Thursday @1830 in Our Lady of Lourdes Church, Dunfermline

Saturday @1615 in St Peter in Chains Church, Inverkeithing
The Catholic Parish of the Most Holy Trinity
Blog at WordPress.com.