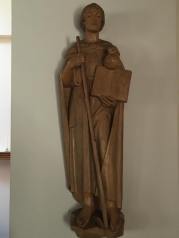 Saint Columba, in Irish: Colm Cille, ‘church dove’; was born on the 7th December 521 and died on this date, 9th June, in 597. He was an Irish abbot and missionary credited with spreading Christianity in what is today our country of Scotland at the start of the Hiberno-Scottish mission. He founded the important abbey on Iona, which became a dominant religious and political institution in the region for centuries. He was highly regarded by both the Gaels of Dál Riata and the Picts, and is remembered today as a Christian saint and one of the Twelve Apostles of Ireland.

St Columba studied under some of Ireland’s most prominent church figures and founded several monasteries in the country. Around 563 he and his twelve companions crossed to Dunaverty near Southend, Argyll in Kintyre before settling in Iona in Scotland, then part of the Irish kingdom of Dál Riata, where they founded a new abbey as a base for spreading Christianity among the northern Pictish kingdoms who were in the most part pagan. He remained active in Irish politics, though he spent most of the remainder of his life in Scotland.

Locally, Inchcolm Island which lies in the boundaries of our parish is named after St Columba, and legend has it, he visited in 567 AD. Whatever the truth of this may be, we do know that the Church has had a long history on the island, with monastic buildings dating back to the 10th century, although the main monastery was built in the 12th century, with the Church of St John’s Rosyth being part of the lands of the monastery based on the Island of Columba.

Let us pray through the intercession of St Columba, and indeed of all our local saints, that we may carry on their legacy of living out our faith with love and devotion and passing the joy of the Good News of Jesus on to others.

1130 in Our Lady of Lourdes Church, Dunfermline

1700 in Our Lady of Lourdes Church, Dunfermline

Please check the weekly Newsletter (found on website) in case of any changes to weekday Mass times:

Tuesday Mass @ 1000 in Our Lady of Lourdes, Dunfermline

Thursday Mass @ 1900 in Our Lady of Lourdes Church, Dunfermline

Thursday @1830 in Our Lady of Lourdes Church, Dunfermline